Motherhood Untold: The Journey to Adopt

*You are not alone. Our blog series, Motherhood Untold, tells the stories of real moms navigating the real challenges and struggles of motherhood. This month we're featuring Emily and her family's adoption story.

Although talking about adoption may feel taboo, the subject is actually much more common than one might think. As a society, there is a lot we still consider taboo when talking about adoption, and because of that, there are many misconceptions. One of the most common is that people assume they know how adoption works: a family wants a baby, so they fill out a stack of paperwork, complete a background check, and voila, they bring home a baby!

No matter the path taken, it should be noted that adoption can be a tough process mentally, emotionally, and financially. For some families, the process is seamless, yet for others, it is filled with ups and downs. This month, we have the privilege of hearing from Emily Thomas, a FIT4MOM Cedar Park client in Texas. Emily shares her family's adoption story and how her village helped her throughout her entire journey. 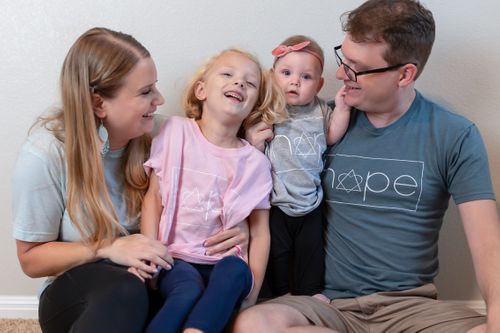 I’ve spent my whole life in Texas and lived in the Austin area for the last 13 years. I’m wife to Kyle, mom to Blakely (6 years), and Maycee (9 months). I am also mom to 6 babies who are waiting for us in heaven and 3 little ones on ice.

My journey to motherhood was a mess, honestly; not at all the fairy tale I had always imagined. It took us a long time to get pregnant the first time and then it tragically ended in miscarriage. The second time… the same story. No one tells you how awful it is to lose babies in the womb… the stillness you see on that ultrasound when you find out they’re gone haunts you forever. I could probably write a whole book about those losses. 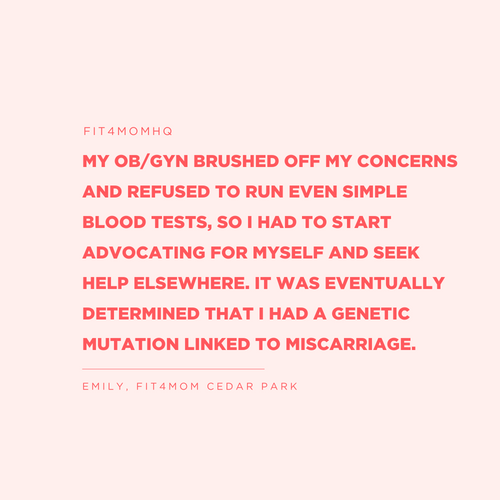 A Series of Losses

At this point in my journey, I was pretty traumatized, but we still desperately wanted to become parents. My OB/GYN brushed off my concerns and refused to run even simple blood tests, so I had to start advocating for myself and seek help elsewhere. It was eventually determined that I had a genetic mutation that is linked to miscarriage. While processing this new information, we got the surprise of a lifetime—we found out I was pregnant again!

The third pregnancy was rough. I was horribly sick; sometimes I could barely get off the couch and I ended up losing 20 pounds. BUT, IT CONTINUED! We passed big milestones, were cleared by the specialists, and truly felt optimistic for the first time in a long time.

Then one day, I noticed that the baby wasn’t moving. We tried to go about our day normally but were gradually becoming more concerned. Late that afternoon, my husband dragged me to the hospital.

They performed a crash c-section and then almost immediately put our baby in an ambulance to the local children’s hospital. I briefly saw her face before they took her away, but it was days before I was able to really see or hold her, all while she fought for her life.

We later discovered that what happened was an extremely rare complication called fetal-maternal hemorrhage. Most obstetricians will go through their entire careers without ever seeing a case of it. The placenta randomly fails in some way causing the baby’s blood to drain out into the mother’s bloodstream. Many or most cases result in stillbirth or severe health problems for the child.

We were extremely lucky, though, that our baby not only survived but thrived.

The Decision to Adopt

When Blakely was 18 months old, my husband and I decided to start the adoption process. Thinking of having another child the ‘normal’ way opened up all kinds of trauma wounds for us, so we decided that trying to adopt was the next best course of action.

We chose domestic infant adoption, which means that expectant mothers choose adoptive families through an adoption agency. We waited, hoping to be chosen by an expectant mom for almost 5 years.

It was during this time that I joined my local FIT4MOM and I can’t tell you how invaluable it was to me. Consistently getting out to the park for fresh air, sunshine, movement, and time with mama-friends really helped during particularly hard days. Because not only were we ‘going through the adoption process’ by keeping up with ALL the paperwork, but also ‘going through the adoption process’ by facing rejection over and over for years, dealing with scammers, and potential matches that ended in us getting ghosted. The waiting and rejection were very hard, but my community with FIT4MOM was always there to lend a listening ear, provide a warm meal, participate in our fundraisers, and watch my daughter when I just needed a break.

Despite all of this support, hope eventually began to dwindle and conversations of “do we just give up?” started to be had between my husband and me. Then one day, our adoption agency sent out an email asking if any of the waiting families would want to consider switching to their embryo adoption program. Our level of desperation had apparently gotten to the level where we were actually open to the idea even though I never thought I would be open to the idea of pregnancy ever again.

We decided to go for it. After waiting to adopt for so long, it felt like it was probably our only chance to have another child. And then when we were immediately chosen by a donor family, that only solidified our belief that we were on the right track.

After the embryo adoption was finalized, we began the IVF process. Over the next several months, we transferred 2 embryos which resulted in a chemical pregnancy, received an endometriosis diagnosis, had surgery, transferred 2 more embryos, and then tragically had another miscarriage.

This was the lowest of the low... THE LOWEST. 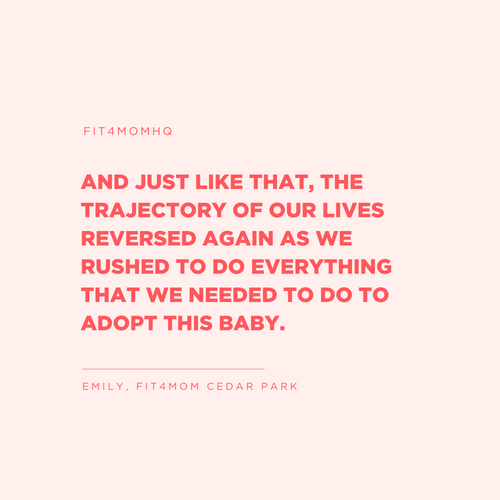 But a couple of weeks later, I got up the courage to leave the house. I attended a FIT4MOM mom’s night out and while there, a friend told me about someone she knew who was pregnant, but not wanting to parent the baby.

And just like that, the trajectory of our lives reversed again as we rushed to do everything that we needed to do to adopt this baby.

About 8 weeks later, I stood in a hospital room watching my baby girl be born.

Motherhood is hard, there is no escaping that, but a positive and supportive mama community like FIT4MOM makes all the difference. 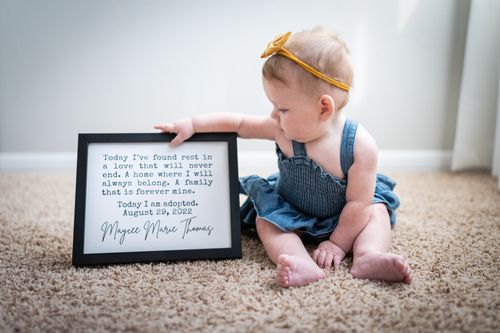 We are so thankful to Emily for being so open and vulnerable about her experiences! What an incredible, long, and tough journey... that ended in the best way possible. If you're looking into adoption, stay strong, Mama. If you're looking for a FIT4MOM village, click here.