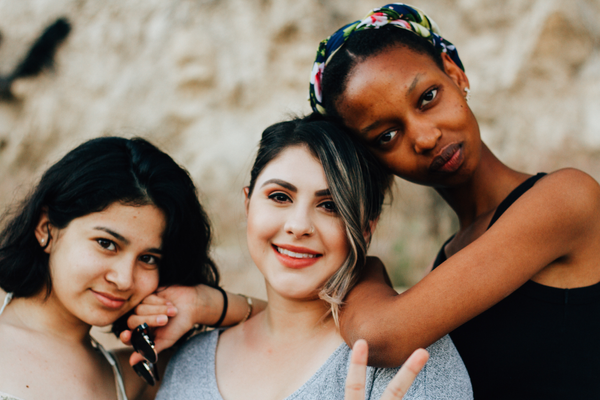 Photo by Omar Lopez on Unsplash

“What I know for sure is that speaking your truth is the most powerful tool we all have. And I’m especially proud, and inspired by all the women who have felt strong enough and empowered enough to speak up and share their personal stories...For too long, women have not been heard or believed if they dare speak the truth...But their time is up. Their time is up...I want all the girls watching here, now, to know that a new day is on the horizon. And when that new day finally dawns, it will be because of a lot of magnificent women, many of whom are right here in this room tonight, and some pretty phenomenal men, fighting hard to make sure that they become the leaders who take us to the time when nobody ever has to say ‘Me too’ again.”

-Oprah at the Golden Globes

It is no secret that right here, in these very times, women are having a moment. We are uprising in faith, grace, and strength to be strong, to be outspoken, to be kind, and to be open-minded. We are continuing to try and shatter glass ceilings, shatter stereotypes, and shattering not having a voice.

We are raising daughters and/or empowering our sister(s), our friends, our nieces, and even our sons and partners to understand and honor that women truly have the power and the courage to speak up, to change the world. To believe in themselves, what they stand for, and their voice.

As modern day mamas and women, to truly and whole-heartedly have the courage and the belief that we can, indeed, change the world, we need to raise our daughters to be strong and open-minded. Gone are the days that a woman's worth was defined as her role in the kitchen, her role as a homemaker, her role as a pretty face, a skinny body, or her role as "just" a mother. Where the nation, and the world, once focused on women and their domestic readiness and beauty, this modern world is throwing that out the window - proving to our daughters they can dream, they can teach, they can lead, and they can do. This world is depending on our daughters and future generations to be compassionate, yet strong. To be brave and determined.

As moms, we're not putting pressure on our daughter(s) to be the future President of the United States, or forcing them to become feminist activists per se. However, as mamas who believe in change, believe in equality, and believe in human rights, we want to raise daughters into young women who turn into adult women who know their strength and opportunity in this world. "I want my daughter to believe, deep down inside her being and soul, that she really CAN be whoever she wants in a world that doesn't tell her any differently," says Lisa Druxman. "And as a mother to a son, I want to raise him as someone who respects women, encourages women, and grows into a man who's respected because of his humility and his heart over power. Kind boys are the new black," says Shelley Hopper.

So, when it comes to raising strong, open-minded daughters (and sons), here are the key attributes Lisa Druxman believes us mamas can implement and teach; the topics that can make a difference today, tomorrow, and in future generations.

Bravery to use your voice

A friend of mine told me a story about her daughter asking her to order something at a restaurant. My friend said that if you want it, you need to order it yourself. I realized upon hearing this that I had been my daughter’s voice for far too long. Get your kids used to using their voice and speaking up for what they want. This too is a practice. And they more they do it, the more competence they will achieve. Encourage them to speak their mind with you too. Yes, they should be respectful but create an environment where your kids speak up for what seems unjust or unfair. This is a practice for what they can bring in to the world. Let your kids have a voice in the family and be a part of decision making.

Willingness And Vulnerability To Be Open-minded

It is human nature to feel that our beliefs are the right ones. We see this in religion, politics, but also in everything from fashion to lifestyle. Make a point in your family to help your kids see things from another perspective. It’s too easy to judge someone for being different. Remind your kids that if you were brought up in that home, with those opportunities, that you would probably be just like them. When you open your mind, you open yourself up to so many new possibilities. Beware of being close minded in your communication in front of your kids. Chances are you have very strong beliefs about something. It’s a practice for all of us to show that we consider different points of view.

Strength To Be Courageous And Passionate

We can’t expect our daughters to be strong leaders if they are always being rescued. Gone are the fairy tales with the damsel in distress. I love seeing new heroines in the story. Be careful not to rescue your heroine in real life. Let her struggle. Let her see what happens when she works hard. Every time she overcomes a challenge, she becomes stronger. Encourage her to do something courageous. Urge your daughter to go beyond her comfort zone. Even if your daughter is not particularly athletic, give her the opportunity to gain physical confidence.

It is very rare that we feel confident in something that we have no experience with. So, to give your child confidence, they need the ability to experience. Gift your child the ability to experience and try new things. Through experience and practice, they will start to develop confidence. One of the best gifts we can give our kids is the appreciation of learning and growth. Encourage your girls to practice at something they have passion for. Help them recognize how they’ve grown and improved at something they have worked on. They will build confidence in their abilities to grow.

Be A Team Player and work well with others

Definitely encourage your daughter to be a part of team sports. If that really doesn’t interest her, consider some sort of club. Teamwork gives people the opportunity to work cooperatively towards a shared purpose. Teams are successful when different opinions are shared and when team members respect one another. She will feel a sense of camaraderie and will gain the experience that we need as adults of working with one another.

We are lucky to live in a society where our girls are, for the most part, being raised with empowerment and hope. But, our world is far from perfect, and there is still hate, doubt, threats, violence, abuse, depression, anxiety and other mental health issues, and school topics like bullying that are all very real threats today.

As mothers and as parents, we are our children’s most powerful influence. We are their voice of empowerment when they come home from school or turn off the TV. Our children will learn from what we do, more than from what we say, and our actions and our words make an incredible impact. Are you practicing what you preach? Are you leading by example? Are you making an effort to unplug, connect, and truly BE THERE for your daughters, your sons, and your friends and family? Here's your reminder to make it a point to practice these things in your own life, right there at home.