“To work or not to work?” is one of the most agonizing decisions we face as mothers.

If you are one of the 70% (Pew Research Center) of working moms in America, you may have struggled with the decision to go back to work after laying your eyes on that sweet baby for the very first time. Even if you had every intention of returning to work, as your maternity leave started to dwindle, you started to question yourself and your choice.

Amy Westervelt, author of Forget Having it All: How America Messed Up Motherhood- and How to Fix It recently said in her book, “We still expect women to work like they don’t have kids and raise kids like they don’t work.” Why should you have to choose one over the other?

The answer is, you shouldn’t. While there is no perfect solution, you deserve to have a career that supports your vision of motherhood. And it IS possible. 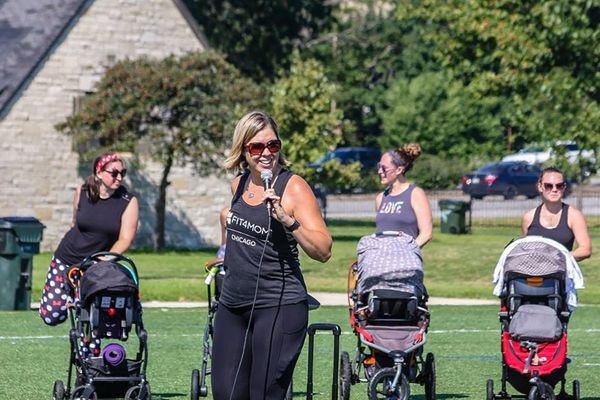 Now is the perfect time to evaluate your career and decide whether it is currently serving you and your family. If it isn’t, then it is your time to consider a career change. In fact, January is the best time to look for a job, as many companies are actively seeking new talent and job opportunities are plentiful (thebalancecareers.com). It is never too late to reimagine your career, here are 5 tips to help you set your career goals in 2019:

You know the saying, “Do what you love and you’ll never work another day in your life.” If you are going to spend hours away from your children, you’ll be much more satisfied doing something you love. What are you are most passionate about? What excites you to get out of bed in the morning? Is it inspiring and empowering others? Is it teaching? Is it living an active lifestyle? Then perhaps becoming a fitness instructor is the path for you. While every career requires work, you won’t mind putting the work into something that feeds your soul.

The most successful people choose careers that combine their passion with their talents. What is your greatest skill set? Think about past jobs, volunteer work, or special projects that energized and inspired you. Develop a list of six to nine skills or activities that you would like to utilize in a new career, then start finding jobs that match this skill set. You may find your new set of skills don’t look exactly the same as the ones you valued most before motherhood which signals it’s time for change.

3. Don’t be afraid to take a chance

By taking a stand and putting your family first, sometimes an unexpected career opportunity can come your way. This was the case for Erin DiNicola, who recently purchased her own franchise business.

Prior to becoming a FIT4MOM owner in Charleston, SC, Erin DiNicola was a United States diplomat serving our country overseas in Vietnam and Afghanistan. She served in many posts for the Department of State. In her spokesperson capacity, she set up press roundtables and arranged high-level interviews for senior officials, including former Secretary of State Hillary Clinton, former Secretary of State John Kerry and former President Barack Obama.

For years, Erin had been entirely focused on work and on advancing her career. But after the death of a dear friend in the line of duty, she decided to shift her focus to building the family she had always wanted. Erin married an active duty Army officer, and soon after, she was pregnant. When Erin’s husband received orders to transfer to a different state, she decided to take a temporary leave of absence from the U.S. Department of State.

Erin discovered FIT4MOM when she started taking classes when her son was three months old. She first became a part-time instructor, then decided to pursue FIT4MOM as her full-time career, officially resigning from her State Department role. A day later, she purchased the FIT4MOM Charleston franchise and she’s never looked back.

“Women are the backbone of our society and FIT4MOM’s low cost to franchise entry and extensive back-end support ensure that we have the tools and resources that we need to be successful as business owners, women and as moms,” said Erin.

Every morning, Erin wakes up to her family. She then goes to work where she meets so many beautiful, strong moms and shares her passion for motherhood and fitness. On a daily basis, she is an example of living each day to its fullest and never being afraid to redefine yourself.

4. Find flexibility that works with your life

Flexibility is the number one benefit many women today are looking for and there are many alternatives to corporate jobs with rigid 9-to-5 schedules. If you are one of the more than 5 million mothers who have put their careers on hold to stay home with your children, than you have experience, education, and skills that are in demand. If you are looking for flexible work you can do from home, companies such as Hire My Mom or Mom Corps help women professionals find flexible, legitimate, home-based work.

Consultants, accountants, writers and bloggers, financial advisors, designers, virtual assistants -- these are just a few careers that can be done from home, with part-time childcare, during the hours that work best with your stage of motherhood.

If the challenge of starting a business excites you, than becoming a mompreneur could be your calling.

Lisa Wilder, Owner of FIT4MOM Chicago, worked in the Financial Services industry for 10 years, eventually becoming a Vice President at Merrill Lynch. Despite her successful financial career, she was faced with a layoff. With three young children, when the opportunity to purchase her own franchise came her way, she jumped at the opportunity.

“I just could not see myself going back to my 9 to 5 job,” said Lisa. “Now, I can run my business and still pick my kids up from school. I can contribute financially to my family and still attend field trips and school functions.”

Lisa now owns and operates one of the largest and most successful franchise territories at FIT4MOM. She has more than 18 locations offering various classes across Chicago and the northern suburbs. She gets to spend her days empowering and inspiring women. Most importantly, becoming a mompreneur has helped her achieve her life goals.

“I am in control of my career. I can feel accomplished both as a mom and a business owner.”

If you are looking for flexibility and have a passion for fitness and motherhood, FIT4MOM is looking for boss moms like you. The company is seeking franchisees in cities across the United States. To find out if a FIT4MOM franchise is right for you, click here, and take the first step toward recharging your career as an mompreneur.