Motherhood. It's Okay To Do It Scared

Are you one who has a mantra, motto, saying, or phrase that you repeat to yourself to get you through the day? I am, and as someone who has lived with anxiety for many years, mine would be “do it scared.” When I begin to feel my moments of worry, I am able to identify that the worry is coming from a place of fear. I repeat to myself, do it scared. 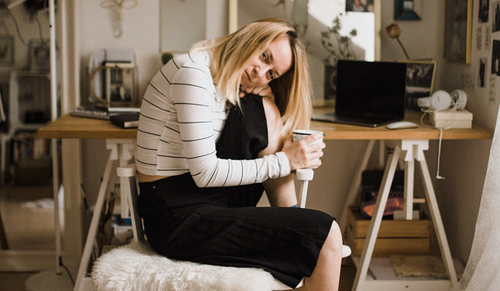 Prior to becoming a mom I knew how important this saying was to me. Thinking of going to college even though that meant moving away from home? Do it scared. You see a cute guy that you want to go up and start talking to yet you’re terrified of rejection? Do it scared. Wanting to apply for that “dream job,” but you are comfortable at your current job? Do it scared.

With having anxiety, I am always trying to prepare for the unknown. I prepare for the “worst case scenario,” and I am never left without a plan (another saying I live by is, if you don’t have a Plan B you don’t have a plan, but that may be for another story). What I wasn’t prepared for was how absolutely terrifying motherhood is. Since the age of thirteen when asked what I wanted to be when I grew up I would always say “a mother,” so the thought of planning a family was never originally scary to me, until it happened.

I was newly married, living in an apartment, and very eager to start a family. My husband and I started trying for a child and my naïve self thought it would be much easier than we were finding it out to be. Months and months had gone by, yet I was trying not to worry. In May of 2015, after just putting in an offer on our first home, we found out I was pregnant. Pure joy is all I felt, for once no fear.

My sister-in-law was in town to help us move, so we had a big plan to tell her about the pregnancy when showing her “the nursery.” She was the first family member we told and could not wait to tell the rest of our family who would be visiting that weekend. Two days later, while at work, my world changed forever when I saw blood on my underwear when using the restroom, a feeling of fear and panic like I could not explain came over me.

Initially I froze not knowing what to do. I remember telling myself, “it’s okay, you’re scared, we can do this. Do it scared.” I left the restroom and immediately called my husband nd then my doctor to develop a plan. With a few weeks still remaining on the lease for our apartment, I decided I would wait there. I was not ready to face, let alone entertain, family until we saw a doctor and got some answers. My husband picked me up from the apartment and we headed to the doctor’s office for an ultrasound. I was terrified, I was shaking. The unknown was almost too much to handle. Once in the room they asked me what seemed to be a million questions, yet I hung on to one, “Have you passed any blood clots?” I hung onto that question as I knew I hadn’t. I had a moment of hope. The technician completed the ultrasound and gave me the okay to use the restroom. She said a doctor would be in shortly. I went to use the restroom, scared from the previous time I used the restroom yet hopeful, hanging onto the one question. Unfortunately, at that moment, I knew before ever speaking to the doctor, I had just lost my baby. I was a mother to a baby who was never going to be with me and that was terrifying.

The loss of our first child was something I was worried I would never make it through. The thoughts and feelings I was having were all new to me, and with my anxiety, new is scary. I reminded myself, do it scared. I began talking about what I was going through, started listening to other moms' stories, and started to heal.

A few months later I became pregnant with our Rainbow Baby (a term many use for a baby born after a loss). Sadly, there was not as much joy this time around when finding out I was pregnant due to the amount of fear. Again the unknown was almost too much to handle. Am I going to remain pregnant? Should I tell people? What do I do? Do it scared. I shared the news with close friends and family, and then decided to share it with anyone I could. I had decided that due to the unknown of how long I would have with this baby I wanted everyone to know. I wanted everyone to love this baby because the last one was only here a short while.

The weeks went on and we began to get more excited and less scared. That is the thing with fear, the more you do something that scares you the less scary it becomes. At our twenty week ultrasound, we were once again struck with an unknown that was almost unbearable. Our son had issues with his kidney. Carrying a Rainbow Baby is already emotionally difficult, so to then find out something physically may be wrong was paralyzing. I reminded myself, do it scared. I continued working, attending my OB appointments, setting up the nursery, and even got maternity photos. The fear somewhat lessened from the routine.

My son was born June 9, 2016, 364 days after losing our first pregnancy. The first few months were a lot of medical appointments to try and figure out his kidney issues, with not many answers. We fell into the category of “wait and see.” Again the unknown, great, thanks, do it scared. In the back of my mind whenever something was going on with our son I immediately went to worrying that it was connected to his kidney issue. Do it scared, try to continue living a “normal” life.

We started having what looked to be normal child development stuff: falling off the growth chart, some difficulty with gross motor skills and low hemoglobin. Again, trying to carry on and not worry too much, do it scared, until his hemoglobin would not come up with extensive iron supplements. On October 26, 2017, following a routine checkup that we didn’t think both parents needed to be at, my son and I were almost not able to leave the doctor’s office without being admitted to the hospital for a blood transfusion. We were only given the OK to go home after scheduling a rush appointment with the pediatric oncologist the next morning. The next sixteen hours painted a picture I will never forget. I watched my husband cry for the very first time. We held each other through the night with little sleep and even less conversation. It was clear that fear filled our house. I was terrified to walk into the Pediatric Cancer Center not knowing what was going on with my small toddler, yet I reminded myself, do it scared.

We sit here today, after dozens of doctor visits, blood draws, a bone marrow biopsy and a genetic test, still not knowing what exactly is going on with our son. What we do know is he has bone marrow failure. Every single day I wake up scared and panicked by the unknown. Some days it may take me an extra fifteen minutes to get out of bed and get to work, but I remind myself do it scared. Every day that I wake up, carry on, fight with insurance to get my son’s treatment and testing covered, and send my son to daycare worried he may come down with an illness that will hospitalize him, I get a little bit stronger. I become a little bit less scared. It does become easier.

I want to share this story, not for sympathy, but for motivation. Many people see fear as something that is debilitating, something that will forever keep you stuck. I am here to encourage you to look at it differently. Whenever you do something that scares you, you gain strength and hope. The reality is motherhood is terrifying; however, Fear can be your greatest motivator, as it is mine.