Letting Go Of a Birth Plan That Didn't Go As Planned

Read the books. Go to the classes. Get a doula. Write your birth plan. STICK to the birth plan. Do A, B & C and you’re golden. Those are the instructions that everyone gives you. Those are the tapes that play over and over again in your head as your approach the big day.

What nobody tells you is that when (not if, but when) your birth plan doesn’t go according to how you planned, it’s okay. It’s normal. You’re fine

You’re not any less of a person because you swayed from the “plan.”

After two years of infertility and two losses, we finally got our rainbow baby. My pregnancy was textbook. I loved being pregnant. I felt my best self (besides the first trimester when I thought I would never eat again) and felt like this is what I was made for.

My water broke at 38 weeks. I was pulling out of my driveway on a 111 temp day in June. I was going to the store to pick up a Father’s day card for a BBQ my sister was throwing for our dad. I didn’t think anything of it at first. I thought it was just me peeing myself. Because, let’s be real, that happens on a daily basis when you’re that pregnant. But when I got to the store, I was literally sitting in a pile of liquid. I ran over to triage to make sure it wasn’t my water breaking, when lo and behold…it was!

I looked at my husband and said “Nope. Not today. I’m not ready.” I wanted him in there just a little longer, so that I could finish reading my last labor and delivery self-help book. I wasn’t prepared yet. I didn’t have all my ducks in a row.

Funny thing…the hospital doesn’t care if you aren’t prepared. You get admitted regardless. So, I put on my gown, got out my “1,2,3 push!” socks and headed into my room.

I went into my labor with the desire to go unmedicated. In my head, I had always assumed I had a pretty high pain tolerance. After all, I had a laparoscopic cyst removal surgery and went through two miscarriages with taking nothing but 1 extra strength tylenol. I GOT THIS.

I wasn’t progressing as fast as they wanted me to. Since my water broke, I was on a time frame. The risk of infection was greater the longer I was in labor. I was admitted at 6:30 pm. and at 3am they started pitocin. They increased the strength every 25 minutes for 6 hours. from 3am to 9am I was in the most excruciating pain I’ve ever felt. I had little to no control over my screaming, yelling, thrashing and cussing out my husband. I kept replaying the tapes in my head. Breathe. If you must, groan like a lion during the peak of your contraction. Sway your hips. Lean over a table. Breathe. Drink water after each contraction. Yell. Moan. Groan. But don’t get an epidural. Because Ina May said I’m strong enough on my own.

I looked at my husband and said nothing. He knew. He said “she needs something.”

He was my L&D rock, without me even having to ask.

Then, my knight and shining armor arrived with an epidural and the labor and delivery fairies were dancing in front of my eyes as he gave it to me. At that moment, I had zero regrets for getting one.

I never thought about my birth plan. I just thought knew that I wasn’t going to physically make it one more second in the state I was in, and was so thankful I could meet my son with happy tears.

Moments after getting the epidural, his heart rate dropped substantially. Nurses and my doctor came running in to play “mommy aerobics” (as the kind nurse had put it).

I was forced to get onto my hands and knees, with an oxygen mask on right after the epidural took effect. If anyone has ever gotten one before, you know you basically lose all mobility to your lower half. It was by His mercies that I was able to get into that position.

Shortly after we tried a few other positions, his heart rate stabilized and my husband and I were able to cry a few short breaths of relief.

During transition, I felt like I was outside of my body.

I was beyond exhausted and found myself taking 40 second naps in between each contraction. My son came at 2:33 pm that afternoon on Father’s day. He was 7 pounds 8 ounces of pure joy and love.

During the following weeks, we had lots of visitors. I had a friend come over and ask me how my labor went. I explained it to her and she said “Too bad you weren't able to do it without the meds.”

I immediately found myself defending my actions.

From that moment on, I avoided labor and delivery conversations and if I were asked, I found myself having to explain WHY I got an epidural. I avoided Instagram pages that glorified home births and/or unmedicated births. They pride themselves in being ABLE to do it. So, because I wasn’t able, that makes me less of a mom? I’m not as strong as those who were able? It’s a terrible thing..to isolate women into these categories. I felt so alone. I felt less-then. And worse, I felt GUILT.

It wasn’t until I talked to a momma friend of mine who just had her third a month after mine was born. We were swapping birth stories and she said that all three were different. She had epidurals with some, and some without. She tore with two and didn’t with the last one. She had a long long labor with the 2nd one and short ones with the 1st and 3rd. It made me realize that every single stinkin’ birth is different. The same women going into labor will experience a different kind of pain every single time.

I learned then it was about community - and that being able to talk to other mamas who just "get you" - is crucial for postpartum support, understanding, empathy, and what creates an unspoken bond that is the mamahood sisterhood.

I wish I had known it was okay to do whatever I needed to do to get through my labor, without judgement.

I wish I hadn’t put my trust in Ina May but rather, in myself.

Trusting myself enough to make decisions when needed. I wish I could have said to the lady on my couch a week after delivering my son that “I was perfectly ABLE to deliver my son into this world” …thank you very much.

It’s a hard thing. Birth. Women are torn apart (literally) and then sewn back together.

I wish I could tell women that a birth plan is a great thing to write out. It gives you an idea of how you may want it to go. But to be prepared… really prepared, for it to not go that way. My advice for them would be to make a birth plan that’s the opposite of what they want. Write it out. Read it. Embrace it. Come to terms with the fact that it may happen.

The narrative that plays in our heads is strong. It has a backbone, a mind of its own. It likes to down play our accomplishments and highlight our weaknesses. We need to shift these mindsets. and we need to lean on those who truly, undeniably support us - in whatever we chose, whatever fate has in store for us, and whatever our unknown future holds...

The next time I get admitted into the hospital, I’m going to play one tape in my head. And that is the image of my son being born and holding him for the first time. Because, in the end, that’s all that matters. Not bragging rights about having a 48 hour unmedicated home birth. Or a quick 2 hour no-pain labor. No. It’s not about what you are able to handle. It’s about you’re able to do. And that is to bring a human being into this world. Now…THAT is something to brag about.

Samantha is a mama to Leo and basically runs one of the prettiest mama Insta accounts ever; go say hi to her at @shelovestoglow. 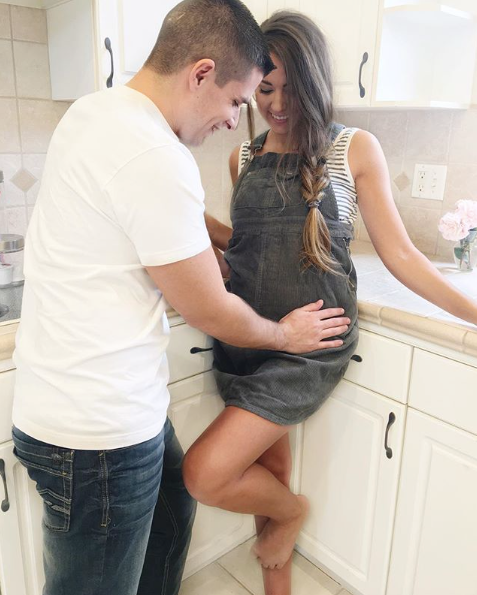