Fit Through the Furlough

December 21st, 2018...a week before Christmas, and already seems like a lifetime ago, right? To those affected by the current US federal government shutdown, that couldn't be more true.

Is the government shutdown now officially the longest on record? Yep..there are currently an estimated 800,000 government workers without pay. "Under existing rules, furloughed federal employees may collect unemployment benefits provided they return them once the federal government reimburses them for unpaid work" (Politico, 2019). Today marks day 28 of the government shutdown and there is no end in sight, as negotiation talks are still at a standstill (Forbes, 2019).

Is our FIT4MOM community affected? Yes.

According to The Balance, here are the major departments shut down:

With over 300 franchise locations throughout the United States, our mamas and their partners/spouses/families are directly affected by the government shutdown and current furlough. So, one of our franchisees is doing something about it... 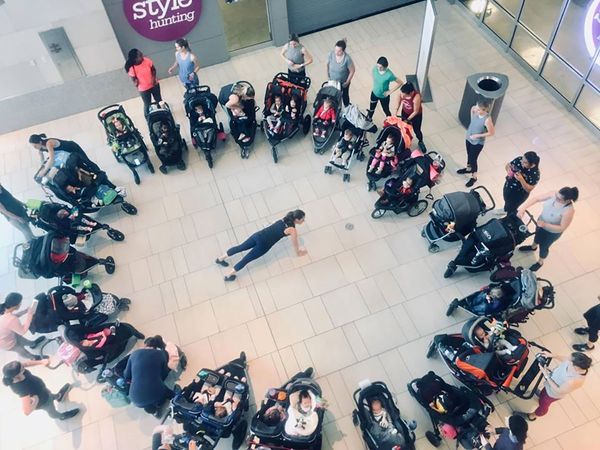 Shannon Link is a mama to two beautiful girls, Chelsea, 27, and Julia, 6, and is also a spouse to US Navy Capt. Jeffrey Link (retired). Shannon owns one of our regional franchises, FIT4MOM Lorton/Springfield/Burke/Woodbridge/Kingstowne, which is located in the Washington DC metro area of Northern Virginia. The franchise covers five major cities affected by the furlough – Lorton, Springfield, Burke, Woodbridge and Kingstown/Alexandria. She was born and raised in Kaiserslautern, Germany, in a very large military/federal community and knows just how much work goes into running our government, worldwide.

Link states, "My heart aches so badly during this government shutdown crisis."

Coast Guard families are also affected by the government shutdown; about "42,000 Coast Guard members have been required to work without pay since the start of the year, as the Department of Homeland Security operates on emergency orders because of the ongoing funding impasse between President Donald Trump and congressional Democrats" says the Military Times, who.also reports that "Coast Guard members will miss their second consecutive paycheck this month if the government shutdown continues to the end of the week" (Military Times, 2019).

"Jon Ostrowski, national president of the Coast Guard Chief Petty Officers Association, said without action soon, another 50,000 Coast Guard retirees will also lose out on their next benefits paycheck at the start of next month...'People are starting to get worried,' he said. 'Now they can’t pay their rent. Many may have made arrangements with landlords or banks to help them for the first month. Missing another paycheck will hit them hard'" (Military Times, 2019).

To those affected by the furlough, thank you for your sacrifices and sending lots of love to you..

For NEW moms in her area, she is issuing a complimentary 10-class pass, and for current members affected by the government shutdown, she is offering half off their next payment. (Proof of furlough is mandatory for discount to be applied). You can contact Shannon directly for more info by emailing her at shannonlink@fit4mom.com .

You can also connect with her franchise Facebook page here.

"I want nothing more than to see smiling mamas - especially during such a challenging time. EXERCISE MAKES YOU HAPPY!" says Link.

Are the mamas in your area directly affected by the furlough? Are you doing something about it to help them and their families? Let us know how in the comments below!