"I'm gonna be fit after I have the baby," I said to my husband, Ryan. "I'm going to work out every day."

I only half-believed the words as they came out of my mouth. It was the 38th week of my pregnancy, and we were walking along the river near our house. I was willing to do anything to get this baby out, and walking was as close as I was going to get to exercise at this point in my pregnancy.

Admittedly, I had a fairly easy go of it, apart from the tailbone pain I had during my final month. I was worried about how I would get the extra weight off postpartum though, and the nurse at my regular OB visits never failed to remind me that I had gained much more than the doctor had recommended. 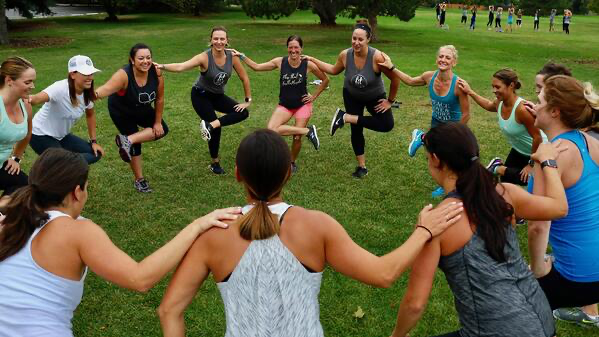 "Say it into the camera," Ryan teased, holding his cell phone camera up to my face.

"I'm going to work out every day. Well, maybe not every day… maybe three days a week… or a few times a week," I backpeddled. "Delete this video!"

"It will be your motivation," he said.

If you had told me then that eight months later, I would have all of my pregnancy weight (and then some) off and would be a fitness instructor, I would have laughed and said you’re joking. Let's be honest, I’ve never been athletic or strong. I was the kid who feigned a headache to get out of kickball in grade school gym class. Sure, I played varsity basketball as a freshman in high school. The detail I usually left out when sharing this with people was that it was a tiny all-girls school, and there weren't enough players. I also played junior varsity. We also lost every. single. game.

Yet here I am, a certified fitness instructor for FIT4MOM Stroller Strides at FIT4MOM Issaquah, Sammamish, SnoRidge.

How did I get here?

Well, let me start by saying, I was an amazing mom before I became a mom. I had a lot of opinions on how moms should and shouldn’t do things and especially on how I would parent our baby.

"We should just put his crib in our room," my husband said early on in my pregnancy.

"He'll be in here most of his first year anyway."

"No way! I will not be one of those moms who co-sleeps. He is going to sleep in his crib in his room. That's that," I said firmly.

Ryan had this way of doing what he calls "letting things float," which is exactly what he did at this moment. Having already been through the baby years with his three kids, he knew I would probably change my tune after Baby A was born.

And he was right—I did change my tune, but not for the reasons he or I would have expected. From the second we came home from the hospital, I felt overwhelmed with anxiety. I had a fair amount of it while driving during my pregnancy, but I chalked that up to having been rear-ended on the interstate twice during my first trimester. In hindsight, I realize that was likely a warning sign of what I may be dealing with postpartum.

I found myself overcome with an intense desire to protect Baby A, which translated into my not wanting anyone to hold him except Ryan or me. That's difficult when you have three stepchildren who have been looking forward to meeting their baby brother for nine months—an eternity for kids! I felt like an extension of my body had just been cut off, and I couldn’t bear the thought of Baby A not being close to me.

I also obsessively checked Baby A’s breathing while he slept. I kept him nearby either in my arms or in the bassinet next to our bed. Even then, the only way I was able to rest was after purchasing a foot monitor that promised to alert me if he stopped breathing.

The first time Baby A slept 12 hours—and one of the only times I might add—I was a nervous wreck. I checked the monitor app on my phone every few minutes to see his pulse rate and oxygen levels.

In addition to the anxiety, I remember just plain not feeling like myself. The exhaustion alone was worse than anything I had expected. I remember several nights in the first few weeks when I cried and told Ryan that I was just so tired; no one had told me it would be this difficult.

"You wouldn’t have believed them if they did tell you," he said.

During that first month when I was awake nursing most hours of the night, I found myself spending way too much time on Google and various form of social media. I stumbled across a Facebook page for FIT4MOM, which had an exercise class for moms with their strollers nearby. I vowed to go as soon as I hit six-weeks postpartum.

It was difficult to get out of the house when Baby A was that small. Some days it felt like we didn't even start sleeping until 9:00 a.m., and we needed to leave by 9:20 a.m. to make it to class.

On my first day at Stroller Strides at FIT4MOM Issaquah, Sammamish, SnoRidge, I was immediately welcomed into this tribe of amazing, strong women. They didn't care if I showed up late or had to step out to nurse my baby, both of which happened regularly. I felt a connection with these women, knowing that many had also experienced what I would consider the most difficult and amazing feat I will ever accomplish in my life—childbirth.

I looked at some of the other mamas with their red strength band in awe as I struggled to do bicep curls with the easier, green band. I could barely hold a plank on my elbows and knees. I worried that if I ran too fast I would wet my pants, which had already happened to me twice at home on the treadmill. I prayed it wouldn't happen here.

Meanwhile, the instructor was cheering me on, telling me I could do it. Reminding me I had just pushed a HUMAN BEING out of my body. Telling me that we all start somewhere.

Soon, Baby A and I were in a routine of attending Stroller Strides nearly every day. We formed friendships with other moms, and I found that when I exercised, my anxiety decreased. I was beginning to feel more and more like myself again.

Ten weeks later, it was time to return to work from maternity leave. Leaving Baby A at daycare prompted a new round of anxiety that I don’t think I would have ever been able to prepare for, and my demanding career left little time for me to be with Baby A, let alone exercise.

While pumping in the mother's room three times a day at work, I scrolled through the FIT4MOM posts on Instagram and Facebook, seeing what my new mom friends were doing at that day’s class.

Two months later, I gave my notice at work.

I became certified as a FIT4MOM Stroller Strides and FIT4BABY instructor at FIT4MOM Issaquah, Sammamish, SnoRidge..

And here I am. Happier and stronger than I’ve ever been before (and using a red band and planking like a BOSS).

* This blog was originally published here on Christina's blog, Christina In Seattle. Go say hi to her on Instagram here (@christinahillsberg)!

Interested in joining the FIT4MOM family? Visit FIT4MOM.COM for information on becoming a member, instructor, or franchise owner.