Adventures in Motherhood: Look on the Bright Side, Mama

I had a laundry list of things to do on Monday morning – including actual laundry, a client phone call, and packing before heading to the airport to travel from California to Ohio solo with just my 19-month-old and me.

I woke up that day feeling ready-to-go and full of optimistic thoughts and self-pep talks. I think I even stared into the mirror a few times and whispered, “You can do this, Mama,” bouncing around like an Olympian preparing for the gold. 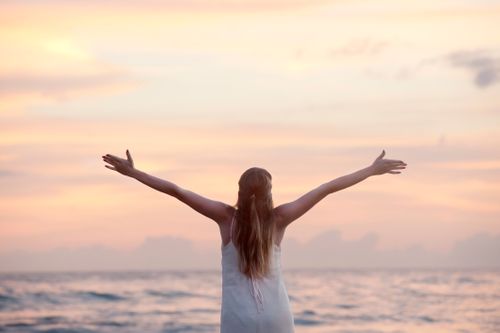 Although this would be my kiddo’s sixth round-trip flight and I had traveled alone with him before, it was the first time I was flying alone with a super active toddler, taking back-to-back flights for a total of nine hours of travel time, all while eight months pregnant.

Did I mention I was alone? I’ve never wanted my husband more.

I was feeling a bit anxious. My doctor even recommended that I avoid travel unless I absolutely positively had to, because I was so close to due date. Well, I didn’t have to. I just really, really wanted to visit my sister and brother-in-law in Ohio before all chaos ensues when this second kiddo arrives and I become a mama of two munchkins under two.

“Am I being selfish?” I asked myself. "Am I putting my little baby at risk? What if I go into labor mid-flight? What if I have my baby in Ohio? What if, on the plane, I’m sitting next to people who don’t like kids? What if my toddler won’t stop squirming around? What if he takes a big huge poop mid-flight? What if he has a total meltdown because we can’t freely play tractor up and down the aisle?"

These thoughts, and more, were swirling around in my head leading up to my trip. As excited as I was for the travel adventure, I was feeling just as uneasy debating if I had made the right decision. And then the ever-dreaded-but-always-there mom guilt showed up. “Nice to see you, too,” I thought.

So back to that Monday morning: I made the conscious effort – mixed with an extra dose of caffeine – to be super positive and only think happy thoughts. Positive thoughts lead to positive outcomes, right?

...and then, it all started going downhill with my toddler pooping on the carpet (don’t all great parenting stories start out this way?).

And then, it may sound minimal after that sh%*# experience (literally), but I also had to re install the car seat. Obviously not a big deal, but just annoying. And then I tripped on the curb at the grocery store while holding my son. And then my client call went extra long forcing me to feel discombobulated. And then the dog barked while on the client call revealing to my corporate client I was indeed at home and most likely still in my pajamas. And then my munchkin took a much shorter nap than usual. And then all of my feelings of hopeful positivity went out the window on the way to the airport.

And then … everything went just fine on our travels.

After a few tears shed when walking away from daddy at the airport drop-off curb (from me, not my son), I bucked up and all of a sudden, it was game on. We had extra snacks and toys for the plane ride, gave the flight attendants a flirty smirk or two (my son, not me) and distracted ourselves on the flights in every creative way I could think of. Sure there were near meltdowns and a super full diaper of about five to seven pees to avoid the tiny airplane bathroom changing table ... but you know what? It all worked out.

And we, my little traveler and me, powered through the exhaustion and lack of comfort of being stuck on an airplane for hours and hours, and made it through just fine. And the result was a really fun trip we’ll always remember.

I know that things in motherhood don’t always end up okay. Let's be honest, does anything go as planned? As someone who tends to be a bit pessimistic, his trip made me realize that sometimes, just sometimes, things aren’t going to be as bad as you think they may be, and that it’s okay to put a little more faith in your kiddo and in yourself as a mama.