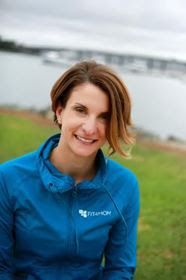 We're so proud of the work our franchisees do across the country to give women the Strength for Motherhood! To share our pride, we shine the spotlight on our franchisees to share their stories and their passion. Today we're shining our Spotlight on Kristin Jacobsen, owner of FIT4MOM Dupont & Lacey, WA.

Kristin received the 2015 Woman of Achievement award from the YWCA of Olympia, WA for her work to empower women through her volunteer time and business leadership. The award is given to those women in the community that are meeting the mission and vision statement of the YWCA Olympia. Their mission is to eliminate racial and gender inequity and advance the social and economic status of all women and girls.

Watch this video to see why Kristin is in the Spotlight!

Read on to learn more about Kristin:

When Kristin gave birth to her daughter in the summer of 2009, she was sure that she had made a mistake. She saw the life she had before a baby slipping away and with each sleepless night and every infant cry, she was unknowingly stepping further and further along the path of postpartum anxiety and depression. Now, with her sweet baby girl in first grade, Kristin remembers all too clearly the shame she felt at being a mom who was not head-over-heels in love with her new role - and who felt like she could not tell anyone how she actually felt.

As a business owner and advocate, Kristin has found her passion in life lies with lifting up moms who are on their own journey of growth. She lives and amplifies the notion that empowered moms lead to healthy families. She is a volunteer leader for the Climb Out of the Darkness, a fundraiser for the non-profit Postpartum Progress, and has brought the Climb to Olympia for the past three years. In 2015, Jessica Juergens joined her as Climb co-leader. Kristin recently received a scholarship to attend a Mental Health First Aid course, in order to better help people developing a mental illness or in a crisis. One nominator noted that, “Kristin’s work gives a voice to an illness which is so often cloaked in shame and isolation, letting us know that we are not alone, it is not our fault, and with the right treatment and support, we can get better.”

Kristin is a Trustee on the Board of Directors for the Child Care Action Council, which advocates for children and families at the local, state and federal level, offers training programs for child care professionals and educates parents in evaluating the quality of their child’s care.

Kristin's FIT4MOM classes are about empowering women to build the strength for motherhood. The FIT4MOM village is that safe space where all moms can find an understanding hug and ears to listen. Kristin’s clients are largely military families, based out of Joint Base Lewis McChord, and she feels particularly strongly that military families need and deserve a supportive village of moms immediately upon their arrival at a new location. The activities offered by FIT4MOM are shown to reduce the length and severity of postpartum mood disorders, such as anxiety and depression, and Kristin sees a strong and important connection between the advocacy and empowerment work of Postpartum Progress and the strength-building and empowerment work of FIT4MOM.

We are so proud of Kristin and her many accomplishments. We are lucky to have her in the FIT4MOM family. If you'd like to get to know Kristin, visit her website, find her on Facebook or send her an email.

For more information about the programs Kristin works with please check out these sites:

Climb Out of the Darkness